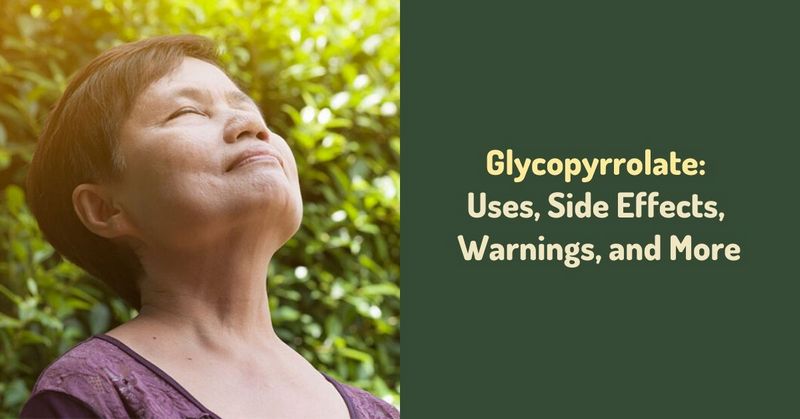 Glycopyrrolate is an inhaled drug that relieves narrowing of the lumen of the bronchi, relaxes the muscles of the respiratory system and is used to treat chronic diseases of the pulmonary system. The drug blocks acetylcholine, replacing it with a medicinal substance, which is similar to the cholinergic receptors in the brain.

The drug belongs to the group of receptors that are excited by muscarine. It blocks m-cholinergic receptors, which are located at the ends of the autonomic nervous system. Nerve endings are responsible for the expansion and narrowing of the lumen of the bronchi, bladder, weakening of peristalsis, decreased secretion of bronchial glands. The medicine blocks the production of acetylcholine, which occurs in the cytoplasm of nerve endings. The drug has a long duration of exposure to the body. Glycopyrrolate blocks the spasm of the lumen of the bronchi, replacing acetylcholine. The drug is similar to the cholinergic receptors in the brain. It effectively affects the smooth muscles of the respiratory system. After inhalation, the drug substance quickly spreads through the body and the therapeutic time begins after five minutes.

After several procedures, the patient has significantly improved respiratory function. After delivery to the body, the drug is rapidly absorbed into the liquid part of the body. Its maximum degree of saturation in the blood occurs after five minutes. The bioavailability of the drug is forty percent of the dose taken. Ninety percent of the drug is absorbed directly in the pulmonary system, ten percent is absorbed in the gastrointestinal tract. Full bioavailability after inhalation is estimated in five percent of patients. With regular therapy, the active component has a maximum degree of saturation of a balanced state of one hundred sixty-six picograms per milliliter.

Glycopyrrolate is prescribed for the treatment of chronic lung pathology. Spastic pulmonary disease is a chronic lung disease in which it is difficult for the patient to breathe. Difficulty breathing occurs due to damage to cells and tissues in the lungs for several years. Also, therapy is indicated for chronic obstructive disease in combination with chronic bronchitis, in which the airways are in a state of inflammation and produce a lot of mucus. Also, the evidence is a thickening of the walls of the bronchi, which lead to a narrowing of the lumen of the airways. The medicine can be used for damage to the walls of the alveoli, loss of their elasticity. The drug is prescribed to patients to improve gas exchange in the lungs, eliminate shortness of breath.

Dosage and mode of application

Only a medical specialist should determine the dosage regimen of Glycopyrrolate. The medication is used only for inhalation. It should not be taken orally. Before use, you will need to open the capsule. Content is placed in the device that comes with the kit. The procedure is carried out through the oral cavity using a device. The therapeutic dosage of the drug is fifty micrograms (one capsule). The procedure is carried out once a day. The procedure must be performed every day at the same time, without gaps. If the procedure was skipped, then you do not need to increase the dosage. The patient needs to take the missed procedure as soon as possible. Before the first use, the patient needs to ask the doctor about the technique of using the device. If there is no desired effect on the background of therapy, the doctor needs to check whether the patient is using the inhaler correctly. During inhalation, Glycopyrrolate is inhaled through the mouth. You can’t swallow, you need to breathe. Through breathing, the drug enters the respiratory system. In persons with kidney pathology, the dosage is selected individually depending on the type of severity of the pathology.

In order to use the inhaler, you need to remove the upper part, then open the device itself, holding the base and tilt it to the side. Release the capsule from its packaging. Then insert it into the appliance. The inhaler has a special chamber for the location of the capsules. Then close the device until it clicks. Then pierce the capsule by pressing on the movable element from two sides. Pressing on the movable part should occur before the click. Press once. After clicking, the movable element is released. Exhale and insert the tube into the oral cavity. Then take a deep breath. Moving elements of the inhaler should be located on the left and right side. During inspiration, there is a trembling sound in the device. It is created by rotating medicinal capsules in the device and spraying the powder. After inhaling, the patient will have a sweet aftertaste in the mouth. If there was no trembling sound during inspiration, then you should check the correct installation of the capsule in the chamber. A slight cough may appear after the procedure. After completion of therapy, the used capsule is removed. The appliance must not be washed; it must be kept dry. The device must be cleaned from the medicine once a week. To do this, it is wiped on the outside and inside with a clean dry cloth, you can not wipe it with a damp cloth. Capsules are not recommended to be stored in the device; they should be stored in a blister in a dry place. A new capsule is used for each procedure.

Use in patients with renal failure

Use in elderly patients

Patients aged 75 years and older may use the drug in the recommended dose.

Common side effects include dry mouth, indigestion, and urinary retention. The remaining cases of undesirable effects on the body appear individually for each person.

The drug can also cause the following side effects:

In people of retirement age, inflammatory processes of the urinary system and headache are more common. When the first signs of an adverse reaction appear, you need to inform a specialist about this. The doctor will conduct complex symptomatic therapy until complete recovery.

The medicine can be used in pregnant women if the therapeutic benefit is greater than the possible danger to the development of the baby. In the course of medical research, it was found that Glycopyrrolate has no harmful effect on the development of the child. But medical studies on pregnant women have not been conducted. There is also no reliable data on the penetration of the drug into breast milk in lactating women. The use of the drug in women during breastfeeding must be agreed with the gynecologist in order to exclude a possible danger to the health of the newborn.

The use of high doses of Glycopyrrolate can cause symptoms associated with m-anticholinergic action and require appropriate symptomatic therapy.

In patients with COPD, regular inhalation administration of the drug in a total dose of 100 and 200 mcg 1 time/day for 28 days was well tolerated.

Acute intoxication with accidental ingestion of the drug is unlikely due to the low bioavailability of Glycopyrrolate when administered orally (about 5%).

The drug is not compatible with all drugs. The combination with cimetidine violates renal clearance (release of metabolites from the liquid part, cleansing the body). Ground clearance is reduced by twenty-three percent. It is undesirable to combine Glycopyrrolate with other m-anticholinergic drugs. Concomitant use with beta-adrenergic receptors does not affect pharmacological kinetics.

The drug is not designed to relieve acute spasm in the lumens of the bronchi. If an allergic reaction develops during treatment, the swallowing process is disturbed, swelling of the tongue appears, then the medicine must be canceled and replaced with an alternative treatment. The drug does not adversely affect the ability to operate the machine. Also, the medicine does not affect the work, which requires an increased psychomotor reaction. Glycopyrrolate does not have a toxic effect on the reproductive system of the patient. During therapy, the fertility of men does not change, the sexual activity of women also remains unchanged. But during therapy, reliable methods of contraception should be used due to the lack of reliable data on the negative effect of the medication on the intrauterine development of the child. Women need to use the barrier method of contraception for the entire period of therapy. The hormonal method of contraception must be agreed with the attending gynecologist.

What Is Pulse Oximetry And How Does It Work? END_OF_DOCUMENT_TOKEN_TO_BE_REPLACED