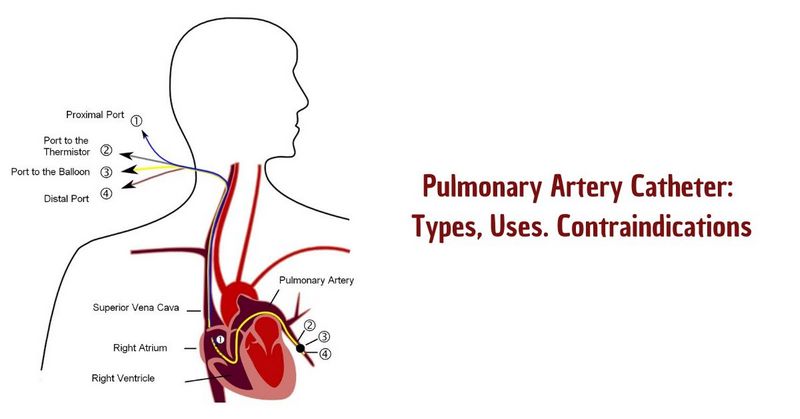 The pulmonary catheter in the classic version is a four-lumen catheter with four “tails”: a venous (proximal) port, a temperature sensor connector, a balloon port and a pulmonary (distal) port. Depending on the patient’s height, the catheter may have different sizes (usually 7 F, 110 cm long). The distal port channel opens at the end of the catheter, proximal at a certain distance from it (depending on size, about 30 cm). A balloon is located at the end of the catheter, and a thermal sensor is located a short distance from it.

Currently, there are different types of pulmonary catheters:

An article on pulmonary arterial catheter was published in 1970 by Cedars-Sinai Medical Center Los Angeles Clinic doctors Jeremy Swan and William Ganz in the New England Journal of Medicine.

Jeremy Swan, being the head of the cardiology department, dealt with the problem of measuring the parameters of central hemodynamics and their implementation in practical medicine. In those days, it was cumbersome, laborious and dangerous methods. Since the 1950s, Swan has been familiar with the work of his student Ronald Bradley about the technique of a “swimming flexible catheter,” which, when inserted into the jugular vein, independently, passively swam to the right ventricle and pulmonary artery. Swan tried to introduce this method into the clinic, but it turned out to be ineffective and caused many side effects. In 1967, Swan was relaxing with his family on the beach and saw a yacht under a spinnaker sail. It occurred to him to use the same sail principle for a catheter inserted with bloodstream into the pulmonary artery. This idea was realized in the form of an inflated spray can and showed high efficiency and ease of manipulation. And his assistant, Ganz, developed a technique for measuring cardiac output using thermodelation.

Currently, due to the widespread use of this technology, indications for PA catheterization are expanding. They include:

What Is Pulse Oximetry And How Does It Work? END_OF_DOCUMENT_TOKEN_TO_BE_REPLACED