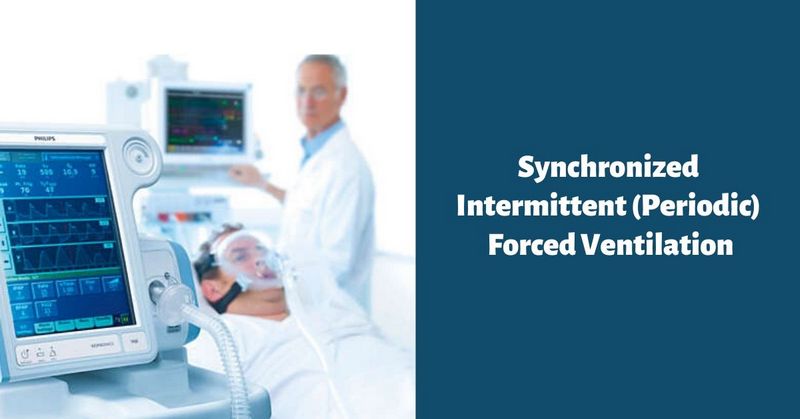 The regimen is mainly used in patients with at least a small number of stable independent attempts at inspiration. Sedative therapy is minimized so as not to depress spontaneous breathing.

It is fundamentally important to choose the trigger sensitivity correctly so that the fan recognizes most of the attempts of inspiration and responds to them, otherwise the SIMV principle will not be fully observed.

Hardware breaths are given at a given frequency, automatically “adjusting” to an independent attempt to inhale (if the trigger is set to a sufficiently sensitive level and if there are such attempts). Since the frequency of forced fSIMV breaths must be strictly observed, the fan calculates the SIMV time after which the next hardware breath (tSIMV, or AC segment) should theoretically be triggered. This time is calculated in seconds using the formula tSIMV = 60 seconds (1 minute) / » IMV. For example, if fSIMV is set to 10 per minute, then tSIMV will be 6 s. This time corresponds to the time of the instrumental respiratory cycle.

This happens if the patient’s inspiratory attempts are very rare (fSPONT is much less than fiSIMV), superficial or absent. If independent attempts to inhale the patient are more active, the hardware breath does not occur strictly after the tSIMV period, and the fan “waits” for a while until the patient has a spontaneous breath. This time is called the “trigger window”; it is about 25% of the calculated tSIMV (segments AB and CD). The next hardware inspiration is expected at point C, but in the absence of an independent attempt to inhale the patient, it does not occur. If during the “trigger window” of the CD there is no independent attempt to inhale the patient, then at point D a forced hardware breath will automatically occur. Next, the cycle repeats. (If the patient’s spontaneous breathing is rare or absent, the SIMV mode is practically no different from the classic synchronized mode with SCMV volume control.)

If fSPONT > fSIMV, the patient is able to take spontaneous breaths with the support of CPAP in the intervals between forced breaths. To maintain CPAP at a given level, the ventilator delivers a specific flow (basic expiratory or spontaneous flow) into the respiratory circuit. During a spontaneous inhalation, this flow increases, while maintaining a given CPAP – the modern principle of “demand flow”. Nevertheless, at the beginning of an independent inspiration, the pressure in the circuit nevertheless decreases, therefore it is very important to establish such a CPAP level so that during an inspiratory attempt of the patient the airway pressure in no case drops to 0 cm water column and below. Negative pressure creates the risk of respiratory discomfort, patient anxiety and swelling of the bronchial mucosa.

What Is Pulse Oximetry And How Does It Work? END_OF_DOCUMENT_TOKEN_TO_BE_REPLACED